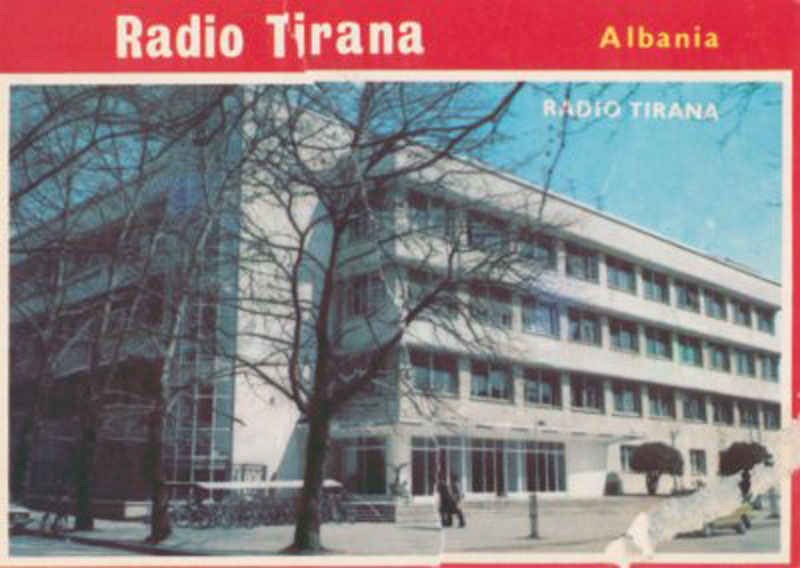 A sound piece made to express my disgust with the tyrannical and megalomaniacal behaviour of the Albanian Socialist leader Enver Hoxha during the 1970’s. Part of Signal, an exhibition curated by Finetuned at the Friese-Green gallery, Brighton and broadcast on the internet. An extended version of the piece is also included on the CD that documented the exhibitions. www.finetuned.org There is a review of the Signal CD  www.furthernoise.org

In the early nineteen seventies I would listen to FA Cup replays on the radio. These matches were gritty affairs. David versus Goliath battles fought out on damp, foggy nights in the North. This was before FM and live football on the TV.  The games were broadcast on Long Wave. The BBC signal was relatively weak. As the matches progressed, and the tension of the game increased the interference from other stations grew louder. One particular turgid eight note fanfare that recurred every three seconds was dominant. Not a constant signal but waves of sound lapping over the match, reaching a crescendo in the last few minutes of the game, rendering it impossible to listen and forcing me to switch off during the nail biting climax and before hearing the result.

Years later, having whistled these few notes and mimed the Pinteresque pause between them to a lot of mystified people, I found out that it was a jamming signal transmitted by Radio Tirana, the state run radio station of the Albanian Republic.  Much as I admire the peoples of Albania I vowed revenge on Enver Hoxha, the evil dictator who had commissioned the spiteful ditty that had mired my youthful enthusiasms.

I asked my mates Tom Hickmore and John Thursfield, both musicians if they could remember the tune. Neither are footballing types and my off key whistling held no clues, but they could starkly recall something that blocked out BBC Radio One’s In Concert, a lamentable prog rock programme broadcast during the same era. We sketched the notes out on guitars as closely as we could. John synthesised it on his computer, deciding that the gaps were as important as the fanfare. How do you accurately remember a pause after thirty five years? Also, I asked John to make a version of the fanfare that blossomed in a cheesy, new composers, aural glasnost kind of way. Something to throw into the mix as a means of relieving the relentless tyranny.

For the Signal broadcast I have laid our remembered version of the jamming signal over the whole soundtrack of Enver Hoxha’s wretched funeral. On the CD it is laid over the misguided wailings of some of his supporters. To hear how accurate our memory of the tune was check ‘with rifle and pick’ on www.intervalsignals.net/countries/albania.htm you’ll get the gist.