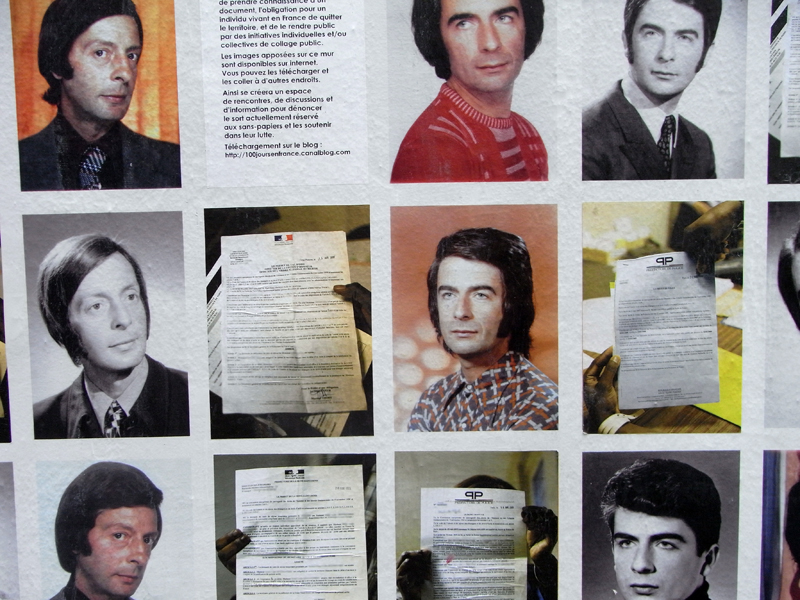 Cycling around central Paris last summer I whizzed past a large wall plastered with photos. Some sort of official document and passport style portraits. It was dark, I was hungry.

The next day I went back. The wall was in the area close to Place de la Republique. There had been sit ins, demonstrations and occupations of nearby buildings by groups of “Sans Papiers” earlier in the year. One lunchtime I had chatted with a group who had occupied a road junction. Without residency papers they were unable get legitimate work, a place to live and were vulnerable to all manner of abuse. Their situation needed ‘regularising’. They were desperate to bring the issue to a head.

I can’t speak French so couldn’t translate the photocopied description about the 100days photo exhibition. I could tell from universal language of the deportation letters that it was giving symbolic support to the sans papiers. The photographs were of people who had fled to France during previous periods of migration. Perhaps they had been taken in the photographic studio next door. History is sketchy. My explanation might be completely wrong. Weren’t the 100 Days something to do with the Battle of Waterloo?

This is part of one of my  two  blogs  for the Nightworker project. The House of Vernacular. Fabrica. Brighton. September-November 2010